What is Gnarly Pippins?

PIPPIN (n.) – 1. An apple tree grown from seed (eastern N. American dialect). Informal: an extraordinary person or thing. Usage: “Bet you any pippins I forage on the shoulder of a highway can make better cider than whatever comes out of your million dollar dessert orchard.”

The phrase “Gnarly Pippins” has seldom been uttered: it’s an amalgam of slang terms with a variety of meanings. Among fruit, apple, and orchard people, these words are used rather often: ‘pippins’ occur by chance all the time the time on field edges, pathways, roadsides, etc. from animals eating apples and dispersing seed via droppings. ‘Gnarly’ is an apt adjective for any type of tree with a shape or framework characterized by its knobs, knots, and curving framework; wild and unchecked growth. Among the proud youth of North America, the word “gnarly” is used as a positive adjective to give praise to something. It’s really an odd phrase…but what’s the deal with it? It is an open invitation to celebrate the new era of wild apples that I feel we’ve come into. Here’s the deal:

The word ‘pippin’ affirms itself in all meanings: any apple that has been grown from seed is extraordinary. Each seed that grows into an apple tree represents a unique variety of apple: a one-of-a-kind expression of the common apple, Malus domestica’s, inherently diverse genetic code. For those that don’t know: the long and short story of apples is that they are not native to North America. They were introduced from the Eurasian landmass about four centuries ago. Rather than other introduced species that have had widespread consequences for North America’s native ecosystems and been labeled “invasive,” apples have naturalized in a more harmonious way. Yes they are grown of humans’ own volition, but they make their own way too among they indigenous plant communities here, blending in with the landscape, filling a niche in the mid-canopy of the woodland.

Each one-of-a-kind apple differs not only in fruit characteristics, but also in all aspects of the tree’s physiology. Tree size, disease susceptibility, bearing habit, leaf shape, bark type, etc.  The list goes on. The only way to propagate apple trees that will produce a consistent type of fruit is to clone them…which is what propels the commercial fruit market. All Braeburn trees have a common ancestry, a single tree found in New Zealand. Ancestry may be an unfit term, as there is NO reproduction going on. No generations of plant breeding have elapsed in Braeburn’s escalation to world fame. It is literally cloned material from the one original tree in New Zealand, with exactly the same disease susceptibility, growth and bearing habit as the original specimen. Grafting, the process by which all apple trees are propagated by humans, is a fancy horticultural term for cloning.

With built-in diversity like that, it seems silly, incongruous, downright CRAZY that we grow only fifteen types of apples for commercial markets in the USA. Even crazier, but of less immediate impact is the fact that this a different face of monoculture in our society. That’s right: if a farmer plants 1 acre of McIntosh on the same rootstock, there is no diversity in that planting. It is the same organism, grafted onto the same rootstock organism, cloned over and over and over again. Let’s take a moment to realize how disparate the growing regions of the continent are. How many different climates and sets of growing conditions are there where the same types of apples are produced? Why are the same crop varieties grown in all the different zones? Why are you so bored of food? Of life?

How many times will we have to learn that monoculture is an unsafe investment and an insecure food system? Investing my entire life savings into a single stock is silly! Putting all of my eggs in one basket is dumb! What if Donald Trump becomes President and all the stock I’ve invested in Solar Panel companies plummets through the floorboards? What if the basket all of my eggs are in actually has a weak piece of osier that could give under weight? Biodiversity is security. Diversify our ecosystems. Grow seedling apples. As we celebrate this new dark age our planet’s climate has entered, the stewardship of our land, especially land involved in our food production, has never been more important. Dismantle monoculture growing practices. Plant a seedling apple nursery in your backyard.

Propagating many different types of apples, especially those grown from seed, local to your area, is the best way to do this. Planting locally adapted varieties that have proven themselves to withstand wacky and messed up weather patterns in your gardens, farms, and homesteads will pay off when the effects of global warming become more pronounced on our springtime temperatures and rainfall amounts. Here in New England we are lucky to have such a selection available to us. Let’s go with nature for once and refuse the MAN OVER NATURE ethos that has prevailed in agriculture for the last century.

This attitude of diversity should permeate all our staple crops, but apples are the first and most important; it becomes easier to understand how biodiversity in ecosystems represents security once the wild apple is studied. It is so plain and easy to see in this case, so easy to work with. I have hope that efforts to expand genetic variety have tangible effects for corn, potatoes, tomatoes, grains, and other staple crops.

A gnarly pippin found in the Quabbin Woods of central Massachusetts, a restricted area  where 5 towns were evacuated in the early 20th century to build a dam and waterway to divert the Swift River and supply water to Boston’s rapidly growing urban center. Exploring this area is a history buff’s wet dream and a hell of a lot of feral apple trees sprouted up from orchards in the Quabbin region. Classical pippin form. Gnarly AF. Battling for sunlight in a stand of hardwoods, but producing fruit nonetheless.

Gnarly Pippins backpatches are now available. This is a badge of 18 out of 27 are left in stock of the first edition. They symbolize a respect and acknowledgment of the wild apple. It is your membership into the alliance of apple folk who stick close to the way nature wanted it. Keep it natural, keep it real, keep it trve. Keep those eyes peeled and take time to harvest, propagate, and promulgate gnarly pippins. This specific design will never be replicated, as homage to the one-of-a-kind habit of the Malus. Get one while they are here.

Purchase buttons for these backpatches, as well as The Wild Apple Forager’s Guide (2016) are posted below. Free shipping on all. Join the forces of wild & real food crops. Reach out to me. Let’s do something positive. 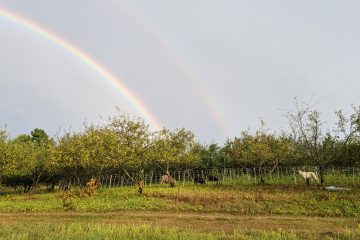 I’m writing this with a huge grin on my face — still glowing after returning from Maine Apple Camp 2022. One of my favorite gatherings of all within the apple and cider world. Check out Read more…

GNARLY PIPPINS is who I am.

Hello all my wild apple folks! Been a minute on here. I’m taking some time to write a new post to articulate a couple of things, but most notably a piece of frustration that has Read more… 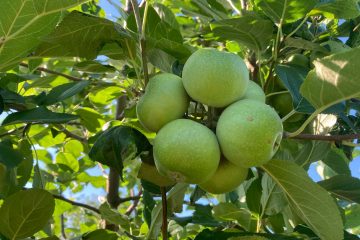 BUT FIRST! Announcing…. 2nd Wild and Seedling Pomological Exhibition Listen up! The second pomological exhibition of exclusively wild and seedling apples will be taking place on Friday November 5th at the Ashfield Community Hall in Read more…